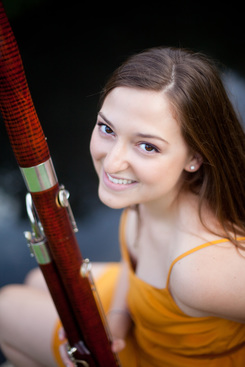 Passionate about tearing down the fourth wall between musicians and audiences, bassoonist Christina Dioguardi regularly performs with chamber groups and orchestras that are igniting a conversation about music.  At present Christina plays with Phoenix (Boston, MA) and the woodwind quintet Fiati Five, and is a substitute with the Boston Philharmonic.  In addition to her role as bassoonist with Phoenix, Christina also serves as the orchestra’s General Manager.  This year Phoenix was named the 2017 Boston Best Classical Ensemble by the Improper Bostonian.  Previously Christina has played with Unitas Ensemble, Callithumpian Consort, the Atlantic Symphony, the Glens Falls Symphony, and the Genesee Valley Orchestra.

Christina’s love for chamber music was ignited in 2008 when she attended Greenwood Music Camp (Cummington, MA).  Since then she has spent her summers exploring chamber music at various festivals including the Bel Canto Institute in Florence, Italy (2009), Chamber Music Campania in Varano, Italy/Sarasota, FL (2013-2016) and Avaloch Farm Music Institute in Boscawen, NH (2015-2017).  She has also developed Phoenix’s Parlor Series, which brings chamber music to new and unique Boston-area venues.

Christina holds a BM from the Eastman School of Music and an MM and Graduate Diploma from the New England Conservatory, where she worked under the tutelage of Richard Svoboda, principal bassoon of the Boston Symphony Orchestra.  At present, Christina is pursing a PhD in Musicology at Brandeis University.  She continually draws inspiration from her teachers past and present, including Charles Bailey, John Hunt, Toni Lipton, Stephen Walt, and Marc Goldberg.  Christina currently lives in Boston with her husband, Steve, and their two cats, Marvin and Luna.