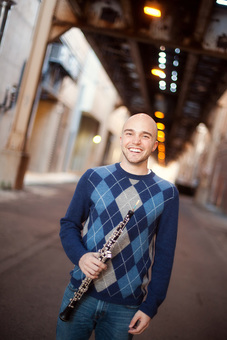 Zach Pulse is a dynamic and committed performer and teacher based in Los Angeles, who strives to engage and educate audiences in unconventional ways through a wide variety of chamber and orchestral music.

In 2015, Zach joined the faculty of Esperanza Azteca Orchestra Los Angeles as oboe instructor. Esperanza Azteca reaches out to underserved junior high and high school students and provides them with instruments, private and group lessons, and orchestral experience in a daily after school program.  Zach will join the teachers and students in a gala concert performance with Placido Domingo later this fall.

In June 2016, Zach joined the Fiati Five woodwind quintet in Italy at the ensemble’s fourth season with Chamber Music Campania. The Fiati Five performed in a range of venues across the Puglia and Campagna regions of Southern Italy where they premiered quintets from composers Whitney George and Cody Forrest. Zach became a member of the Fiati Five in 2015.

In Los Angeles, Zach is about to begin his third season of principal oboist of the American Youth Symphony. He also performs regularly with the Kaleidoscope Chamber Orchestra, a conductorless ensemble that prides itself on putting together large orchestral works and giving numerous premieres, including works by Lior Rosner, Adam Schoenberg, and Jonathan Russell.

While studying at the University of Southern California, Zach formed a wind sextet with colleagues, the Cardinal Winds. The Cardinal Winds were recipients of the 2014-2015 Max H. Gluck Fellowship Program at USC, which allowed them to perform outreach concerts at schools, hospitals, and retirement homes all around L.A. County. In March 2015, the Cardinal Winds were awarded Grand Prize at the Plowman Chamber Music Competition in Columbia, Missouri.

While studying at the University of Michigan, Zach performed frequently with the Dearborn Symphony Orchestra, the U of M Contemporary Directions Ensemble, Early Music Ensemble, and University Symphony Orchestra, an ensemble in which he played Principal Oboe on their Grammy-nominated 2013 Naxos World Premiere Recording of Darius Milhaud’s complete Orestia of Aeschylus. In 2014, he was awarded with the Gottlieb Variations prize for outstanding solo performance on the University of Michigan Collage Concert.

Zach holds Master in Music degrees in both Oboe Performance and Chamber Music from the University of Michigan where he studied under Nancy Ambrose King.  He earned his Bachelor’s degree from Roosevelt University in Chicago, IL where he studied with Peggy Michel.